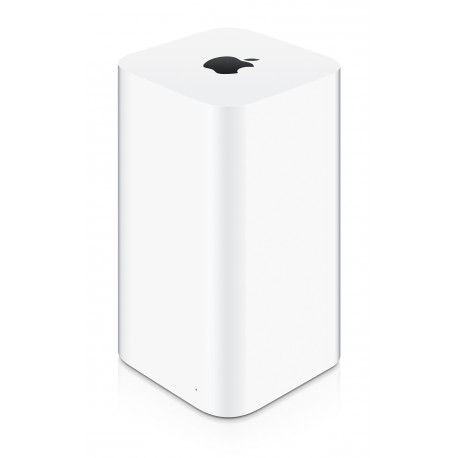 By buying this product you can collect up to 25 loyalty points. Your cart will total 25 points that can be converted into a voucher of $2.50.

Features:
Ultrafast 802.11ac Wi-Fi.
With 802.11ac technology and a powerful beamforming antenna array, AirPort Extreme gives you up to 3x faster Wi-Fi and a stronger, clearer signal.1 And because it transmits at both the 2.4GHz and 5GHz frequencies at the same time, your wireless devices will automatically connect to the best available band for the fastest performance possible.

Designed with performance in mind.
With the antennas at the top of the elevated design, AirPort Extreme now has a higher platform for dispersing the signal. We also increased the number of antennas. There are now six of them - three for the 2.4GHz band and three for the 5GHz band. Together with 802.11ac technology, they let you connect faster, farther, and with more power than ever before.

Share your hard drive or printer.
AirPort Extreme can turn any external USB hard drive into a secure drive you can share across your Wi-Fi network. So all the documents, videos, photos, and other files instantly become available to anyone, Mac and PC users alike. You can even connect a p

The AirPort Extreme Base Station offers Wi-Fi speeds up to 3x faster than the previous generation. It features next-generation 802.11ac Wi-Fi, a powerful beamforming antenna array for higher performance and range, simultaneous dual-band support, and a new vertical design with a smaller footprint. And the AirPort Extreme is easy to set up and highly secure, letting you share your broadband Internet connection, a USB printer, or a hard drive. 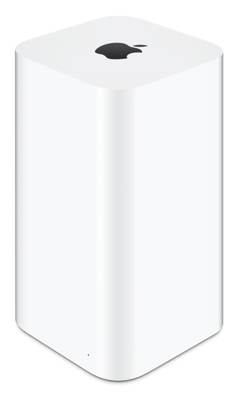 With three-stream 802.11ac technology, the AirPort Extreme Base Station can reach data rates of up to 1.3 Gbps (based on theoretical peak speeds) -- up to three times faster than 802.11n Wi‑Fi. You also get double the channel bandwidth, with 80 MHz-wide channels providing more room for more data to flow faster than ever. And if you have 802.11a/b/g/n devices, AirPort Extreme maximizes that connection as well.

It features simultaneous dual-band 802.11ac Wi‑Fi, which transmits at both the 2.4GHz and 5GHz frequencies at the same time. That means your devices automatically connect to the best available band for the fastest possible performance.

Beamforming Puts the Focus on Your Device

The new AirPort Extreme Base Station features the intelligent, powerful beamforming antenna array. Most base station antennas emit an equal and constant Wi‑Fi signal in all directions. But the beamforming antenna array is smarter -- it knows where an 802.11ac device is on the network. Then AirPort Extreme targets its signal to that device, so your Wi‑Fi signal is stronger, clearer, and faster.

Connect to Wi‑Fi from Any Device

The AirPort Extreme can turn an external USB hard drive into a drive you can share with all the users on your network and access securely over the Internet. This feature--AirPort Disk--is a simple and convenient way to share files among everyone in your family, office, or class.

Just connect the external hard drive to the USB port on the back of your AirPort Extreme and all the documents, videos, photos, and other files on the drive instantly become available to anyone on the secure network -- whether they use a Mac or a PC.

With its wireless printing capabilities, you can plug a printer into the AirPort Extreme, add it to the printer list on your Mac or PC, and start printing -- all without a cable tethered to a computer. AirPort Extreme uses the Mac- and PC-compatible Bonjour networking technology to let everyone on the network take advantage of one centrally available printer.

If you want to share a hard drive as well as share a printer across a network, you can connect a USB hub to the AirPort Extreme and attach your devices to the hub. Share both a printer and a hard drive, multiple printers, multiple hard drives, or a combination.

What's in the Box